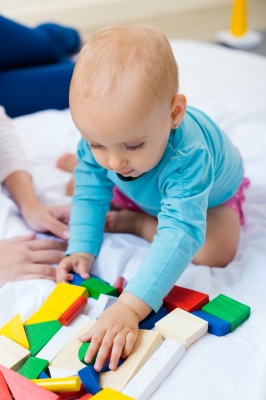 In a workshop with neuroscientist Alan Schore, we were shown a sequence of photos in which an infant and its mother were playing gleefully together. One of the photos shows the infant grabbing a handful of the mother’s hair. The next photo was the infant with its arms crossed, protecting its face. The next photo is the mother, noticing the infant’s distress, plays with its feet, to tease it back into play.

Alan said that is what people observed. He said, no one immediately knew why the baby withdrew and protected itself. When they later looked at the high speed photography, there were additional photos other than the ones he originally showed us to illustrate what he an others – including the mother – were aware of.

Alan noted that the mother responded beautifully to – in spite of discomfort from the hair being pulled – tease the infant back into delightful play.

He said, ‘What if this had been a ‘borderline’ mother who – because of having her hair pulled – either withdrew from the infant, or hit the infant?’

Which did we learn as kids? When we consistently are taught that at any moment, we — or someone — could do something and it would be the end of the world, we cannot develop a natural ability to calm ourselves. When we are consistently taught that things sometimes go wrong, and if they do, we can work it out, we develop a natural ability to calm ourselves.