A Bit of Anticipatory Anxiety And How It Resolved 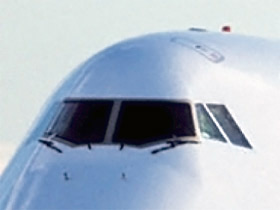 At Pan Am, when I was flying the old 707, the 747 was delivered to the airline. I was too “junior” on the seniority list to get a slot on it. After several years of waiting, I started 747 ground school training with great excitement.

The only problem was, that — occasionally — in the cold air at cruise altitude, the adhesive bonding the optical glass to the structural glass would give way, and the optical glass would come loose and fly off. They explained that if it did, the other pilot would still be able to see through his or her windshield, or if both windshields were to have the same problem (which never had happened) then the plane could be landed automatically on autopilot.

Sounded OK to me, until they said, ” . . . And when it happens (when the optical glass comes off suddenly) it sounds like a shotgun just went off in the cockpit.” And I said to myself, “Oh shit! I’ve been waiting to fly this airplane for five years, and now, as I fly it, all I’m going to be thinking about is that shotgun sound going off in the cockpit!”

Once I realized that that was the worst thing possible, the anticipatory anxiety about it went away. Anxiety is always about things getting worse. If we get a good handle of what “worse” really could be, and accept it, then anxiety about it often goes away.