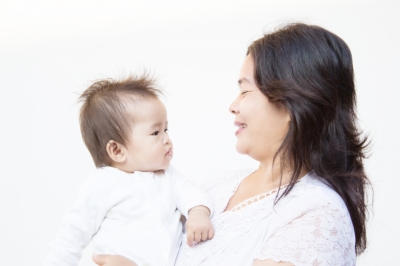 For some time, psychiatry has known that the pre-frontal cortex plays vital role in the regulation of emotional states. That is not new information. But what is new comes from putting infants and their mothers together on PET scans and studying the interaction.

The Prefrontal Cortex – No Flow, No Grow

Alan Schore’s research at UCLA shows that for the prefrontal cortex to develop – and thus be physically adequate to LEARN to regulate emotions – it has to be stimulated by interaction between the infant and the mother during the first year of life.

Stimulation – face to face visual stimulation – stimulates the infant’s prefrontal cortex and increases blood flow, which in turn causes that part of the brain to grow.

But since the pre-frontal cortex is not present at birth, its operation is not innate, and must be learned. Emotional regulation is learned – or not learned – viz a viz the relationship with the primary caregiver. If the child learns to regulate his/he emotions independently, it is learned by internalization of the behavior of the primary caregiver, generally the mother.

All healthy development of the personality depends upon learning to regulate ones emotions independently. Though great stress is placed on IQ, EQ (emotional intelligence) makes the use of IQ possible and practical in the real world.

Many a genius with little ability to regulate emotions has committed suicide or turned to drugs and alcohol in an attempt to regulate – or dispense with – emotions.

If the first year has provided the physical ‘computer’ which can learn to regulate emotions, the behavior interaction between the infant and the mother has to be ‘downloaded’ into the child’s brain.

This means, in order for the child to learn to regulate emotions, the mother MUST REGULATE THE CHILD’S EMOTIONS FOR HIM/HER and MUST DO IT IN RESPONSE TO THE CHILD’S EMOTIONAL STATE and MUST DO IT CONSISTENTLY ENOUGH and SIMPLY ENOUGH for the infant to ‘get it’ and take it in and memorize it so that, later, when the child is alone or on their own, the internalized ‘movie’ of ever-present mom, ever- consistently attuned mom, the mom who knows what I feel mom, the mom I can count on so completely that I can take her for granted mom . . . THAT mom has to replay like a movie whenever the child needs to calm himself or herself.

Let’s say that during the first year of life, whenever the infant is upset (and this is a time when the infant has ZERO capability to calm itself) the mother tunes into the child emotionally just like you tune a radio to a station and hear the music. The music here is the emotion the child is experiencing. Mom tunes in and ‘hears’ (feels) what the child is feeling LITERALLY.

Feeling What Another Feels – The Emotional Attunement

This is NOT an intellectual exercise. This is NOT mom figuring it out. How do we know? Alan Schore’s research has shown that when an infant gets upset, the right pre-frontal orbito cortex ‘lights up’ on the PET scan. IF the mother is emotionally attuned to the child as the moment the child’s right pre-frontal orbito-cortex lights up, hers lights up. 30/1000 ths of a second later.

This is too fast for it to be intellectual. No one can figure out anything in 30/1000 ths of a second. It is simply a direct right-brain (child) to right brain (mother) connection. It only takes place if the mother has the emotionally capability and is emotionally available.

What if things go wrong? If the mother is not emotionally capable, available or attuned when the infant is upset, the child gets more upset and the child’s right prefrontal orbito cortex lights up even more.

Apparently the child is sending the message with more intensity. If mom continues to fail to ‘get it’ the intensity increases.

Finally, if the mother still doesn’t ‘get it’, the intensity is greater than the child can tolerate. Cortosols are released into the active area, and the brain cells are DESTROYED in order to allow the child to quiet down.

Otherwise, the prefrontal cortex does not physically develop and/or the software doesn’t get installed, or installed well.

For the first fifty years or so, psychology believed infants connected to parents because they were taken care of. This was part of ‘drive theory.’ The child has instinctual drives, including hunger, and if the parents help satisfy that drive, the child connects with the parents.

Object Relations theory took the view that children are just wired up to seek ‘objects’ (meaning others) and it was not due to drives. This view has pretty much taken over the second fifty years of psychology as research supports this view.

George, Kaplan, & Main developed an interview which is designed to determine – from interviewing the parent – whether or the that parent’s child is securely attached. The parent is scored on the following:

Meta is a prefix, and refers to that which transcends. Our personalities have many parts. There is some degree of conflict between the parts. Thus, ‘being meta to one’s self’ has to do with transcending two or more parts of the self. This ability to oversee, or transcend, or ‘be met to one’s self’ all but guarantees the parent will have the ability to truly connect with their child in a way that produces secure attachment.

And the inability to ‘be meta to one’s self’ all but guarantees insecure attachment.

What this means is, that to be an effective parent, a parent who can produce a securely attached child, the parent must be able to communicate simply and concisely, be constantly self-examining, and be constantly emotionally and intellectually attuned to the child.

These qualities allow the child to know s/he is taken seriously, that the parent can SENSE the child’s emotional state,even without words, and is heard and responded to based on his/her needs (not the parent’s needs and not the parent’s agenda or what the parent thinks intellectually the child feels or needs). This allows the child to be soothed, to feel secure and to internalize the soothing behavior of the parent so that the child can – like replaying a video inside – soothe him/herself.

It is like this. The part of the brain that can internalize the parent and learn to self-soothe starts to physically develop at around 10 months, and completes that growth spurt at 15 to 18 months (there is another growth spurt associated with puberty). If, during this time, the parent is reliably and consistently available and attuned to the child, the child internalizes what is needed for self-soothing, and otherwise not.

So, the child who is secure has ‘mom’ built in, and so, when going to school, can be emotionally poised because s/he knows s/he can ‘replay the soothing movie’ if there is distress. The child who does not have mom ‘INSIDE’ protests that s/he cannot go to school unless mom is BESIDE.

Mom must be available to regulate the child’s emotional state, and the question is only whether mom is inside allowing the child to feel secure independently or needs mom beside him/her to feel secure dependently.

If ENOUGH were built in, separation from these other sources of security would not be necessary.

When enough is not built in, in order to fly comfortably, we have to make up for – or to compensate for -development that did not take place way back before we can even remember.

Fortunately, we have been able to develop the means to do that.