The Terrible Twos: Takeoff and Turbulence 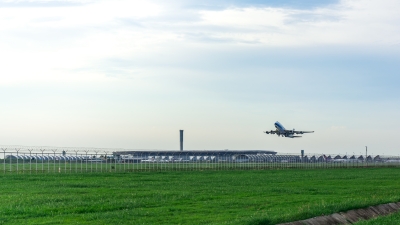 Two parts of the flight bother people most: takeoff and turbulence.

Takeoff is brief, but turbulence can last. So let’s consider the kind of turbulence you sometimes get at cruise altitude, turbulence not associated with clouds: Clear Air Turbulence.

So, at the equator – more than any other place on the planet – the earth is trying to SLING air AWAY from the planet.

When that air being slung away from the planet runs out of momentum, it starts to come back down . . . but it can’t come down there – at the equator – because air is continuously flowing upward there.

And you know New York or San Francisco are moving slower. But how much? If you divide 19,000 miles by 24 hours, you get a linear speed of about 800 miles per hour.

So New York or San Francisco are moving about 200 miles per hour slower than cities near the equator, like Guayaquil or Belem.

So, air that is slung away from the planet down at Guayaquil, when it migrates up over New York, is moving 200 miles per hour FASTER than New York is.

That faster air is what we call, the jet stream.

Obviously if you are going eastbound, you want to get in the jetstream and let it help you get to your destination faster.

But, staying in or staying out of the jetstream is a lot easier said than done. Why?

Now, if you are in the middle of this fast moving air, which we call the jet stream, all the air is moving at the same speed, and it is smooth to fly in there.

But on the edge of the jet stream, where fastmoving air is scrubbing against air that is not moving, there is turbulence.

It’s like this: if you are in a train going 50 miles per hour, there is no turbulence IN the train. But if you are on the platform of a train station when the train goes zipping through there, forget it if you are trying to read a newspaper; turbulence from the jet stream like train won’t let you.

But if you were two blocks from the railroad tracks, you could read your newspaper; there would be no turbulence.

When we as pilots get into jetstream turbulence, it is not practical to try to turn and go north or turn and go south, because the turbulence area is usually to wide to make that practical.

What IS practical – in many cases – is to go up or down. The area of jetstream turbulence is often limited to just a few thousand feet.

Now, all this effort has been aimed at one thing: to help you understand that: Clear Air Turbulence is natural because the jet stream is natural.

But there is another reassuring thing you could get from this: since the earth is rotating at a constant speed, the amount of turbulence that can be caused by the earth’s rotation is LIMITED. It cannot increase. At any moment in time, there is some place in the sky where turbulence is at the maximum and lots of places where there is none at all.

We KNOW the maximum turbulence possible. We build airplanes four times stronger than that!

What this means is, there is no way this completely natural Clear Air Turbulence mother nature provides can be a problem for an airliner.

Unfortunately, yes. Though your intellectual left brain can completely understand that turbulence is OK, your emotional right brain still is going to have a problem with turbulence . . . until you master the jello exercise.

There is another thing that gets mixed up with turbulence, and that is fear of high places. People who find they have fear of heights tend to believe it will cause trouble when flying. But fear of heights, in my experience, is a problem only when out in the open. When up high and enclosed, falling from the high place is impossible. The idea of the plane falling is a different thing and has a different cause.

The cure to fear of the airplane falling is both intellectual and emotional.

The cure to fear of high places is intellectual: it requires simply understanding that what you feel when up high is normal, and that there IS reason to be on guard when up high and not enclosed.

Fear of high places has has to do with two things:

1. something called proprioception, and

2. dreams of flying like Peter Pan, Mary Poppins, and The Flying Nun.

Some of the following is from: http://pages.prodigy.net/unohu/neuro.htm#Prop

Information from the following sensory systems is used to determine where our bodies are in relation to their environment:

Proprioception is a dynamic sense, allowing continuous accommodations and adaptations to a shifting environment (such as in dance, or moving through a crowded room).

If any of these functions [the five systems] are irregular, we either have a diminished sense of body-in-space.

1. The information received by the brain from the inner ear regarding the position of our heads, the pull of gravity, the speed and acceleration of our movement.

2. The interpretation of messages received by our eyes about both the space and our position and posture

3. The assorted information received by our brain from tactile, kinesthetic and proprioceptive sites located throughout the body

4.The messages received by the brain through smell, a sense on which we unconsciously rely to discern direction and distance from objects and events in our environment

5.The interpretation of the messages we have received through hearing, which also helps us orient to specific objects and events in our environment.

How does this connect with fear of heights? Vision exerts strong and sometimes supreme command over our other senses. It tends to be the primary means we rely on to maintain our balance.

To be useful to maintain our balance – and to give us a sense of orientation in space – the eyes need something within thirty feet to use as a reference.

Just at the time when you need your balance most, up high where you might fall, your primary sense of balance – the eyes – run into difficulty.

This can be complicated in people who are cross dominant (e.g. right handed but left eyed) because other senses have a harder time compensating for the fact that vision isn’t helping you balance; in fact, since he eyes are searching in and out, vision may be throwing your balance off.

These characters have delighted us in stories of flying – not with a plane – but just bodily. Captain Truman Cummings, who started the first course on fear of flying at Pan Am in 1975, has said that most pilots have fear of heights – not when enclosed as in the cockpit of a plane – but when up high and not enclosed. He said it has to do with dreams. It may be that all of us have dreams of flying – bodily like Peter Pan, Mary Poppins, and The Flying Nun.

Captain Cummings believed pilots have such dreams more than most people. Thus, when pilots are up high and not enclosed, the idea from the dream of just leaping out and floating effortlessly across the sky, starts to come from unconsciousness to consciousness.

As it does, the budding awareness that we are having impulses to just leap out there sets off alarms; we become frightened by the yearning to leap, because though it is delightful as a fantasy, it is terrifying rationally because we know that obeying this urge would be fatal.

So if you have fear of heights, I think you ought to cut yourself some slack about it. It may be nothing more than the result of dreams of flying like Mary Poppins. Or, it may be completely normal proprioceptive awareness when up high and more than 30 feet from anything your eyes can lock on to.

So what’s the bottom line:

If you have had fear of heights, the fear of being up high where you are not enclosed, that is not going to connect with flying, because – after all – many pilots have that, too.

And if you ARE inclosed – as in a glass elevator – the same proprioceptive things happen there. As you look through the glass wall of the elevator, there is nothing within thirty feet for yours eyes to lock onto.

Again, it means nothing when it comes to flying.

To cure that, we have giving you here a left brain intellectual understanding. That’s just half the cure. We also have to give the right brain a way to picture what IS holding the plane up. So, if being up high when enclosed in a plane is a problem, get out your copy of “The Control of Anxiety” and review the jello exercise.