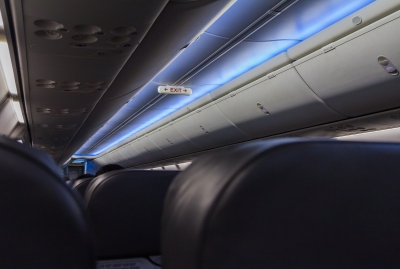 When the plane is parked at the gate, it is using power either from a thing we call the APU (Aux Power Unit) on-board the plane, or the plane is plugged into the power coming from the same electric company that produces power for your home. Planes just use a very long and very heavy extension cord. Remember, that is when the plane is sitting still.

Now, before the plane is being moved back from the gate, if they were using the long extension cord, it is going to have to be pulled. So, the pilots start the APU. When you first start the APU and start making it produce power, it often disconnects, and may shut down. The APU is sensitive because it is designed for unattended operation, so it is equipped with protective devices which cause it to shut itself down if there is any indication of a problem with the APU. As a result, unnecessary shutdowns are not uncommon. The APU has to be reset and restarted. That’s all.

Once the engines are started, electrical power is produced by generators turned by the engines, and the APU is shutdown. The APU is not ordinarily used in the air. This means, APU problems are not relevant to flight itself.