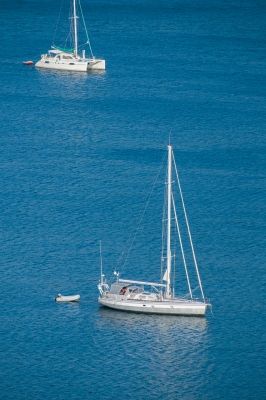 Though fear of flying can be triggered by a bad flight, other passengers on the same flight do not develop fear of flying. Whether one develops fear of flying depends largely on how well a person has learned to naturally and automatically control and regulate feelings using resources build inside.

When enough is built inside, it is not necessary to turn to unnatural resources such as drugs, or to control everything so that nothing happens to trigger anxiety or panic.

One way to think of this is to consider a sailboat. Sailboats with keels can withstand strong winds without being capsized. Why? Because the bottom of the keel is filled with lead or iron to make it difficult for the boat to be tipped over. The natural ability of the keel-equipped boat to be ‘self-righting’ is similar to the natural ability to be ‘self-soothing’, to be able to re balance ones self easily and naturally.

But in a boat that does not have a heavy weight built into the keep, when the wings blow, the sailors have to use their own weight to keep the boat upright, by sitting on the edge of the boat, or even extending their bodies out over the water to counterbalance the effect of the wind on the sails.

Without a heavy keel, the sailors must either avoid strong winds or must use the described control to keep the boat from capsizing.

Obviously, it is easier when resources are – like the weighted keel – built in. If resources are built in, the boat stays upright, or close to upright, naturally. And, it doesn’t need to avoid conditions that would be difficult or impossible for boats without such a keel.

When – instead of boats – it comes to people, how are those resources built in? Because of research by Daniel Stern, Alan Schore, and others, we understand far more about how the ability to regulate emotions develops.

PET scans have made it possible to see what areas of the brain are active – or fail to be active when they should be active – to regulate emotions.

This research tells us that the ability to regulate emotions is produced by the nature of the relationship between the mother and the child, mostly during the first two years of life.

When I had pointed this out before, some have objected that I am blaming mothers; so notice how the following article contrasts old thinking versus new thinking. Much of what your mother would have needed to help you better develop the ability to regulate emotions was not known until just recently.

Please read the following article and you will gain, I believe, a great deal of understanding on what led to the present problem, and on how to help your own children be better able to regulate emotions naturally.

From what I have learned working with fearful fliers is this: when they children and got upset, their mothers were not good at calming them, but were upset by their child being upset.

The mothers were unable to help calm the overloaded and overwhelmed child. In fact, the mothers frequently were the cause of overload and over- whelm. Note this when you read the following: ‘Then, you notice the baby turns away. You sense your child needs you to back off for awhile as she goes back to a state of calm and restful inactivity’ and . . . ‘Learn how to help your baby regulate his emotions, for example, by offering an emotion- ally overloaded baby some soothing sounds or rocking to help him calm down.’

Research has shown that when mothers become overwhelmed by their child being upset, destabilize the child and prevent the child from learning to regulate emotions.

Please see the full text of this extremely important article at: http://cms.psychologytoday.com/articles/pto-20000701-000033.html

The following is a very condensed version of the article ‘Raising Baby: What You Need To Know’ by Joanna Lipari.

The key to stimulating emotional and intellectual growth in your child is your behavior. The baby’s brain is the hardware; your behavior provides the software.

It is the emotional quality of the relationship you have with your baby that will stimulate his or her brain for optimum emotional and intellectual growth.

THE NEW THINKING: Studies suggest that pushing baby to learn words, numbers, colors and shapes too early gets in the way of the development of the baby’s ability to learn. Instead, focus on building emotional skills.

WHAT TO DO: The central issue is your baby’s emotional development.

2. NOT JUST A SCREAMING MEATLOAF: BIRTH TO TWO MONTHS.

THE NEW THINKING: In his revolutionary book, ‘The Interpersonal World of the Infant’, psychiatrist Daniel Stem challenged the conventional wisdom on infant development by proposing that babies come into this world as social beings.

WHAT TO DO: See your baby for the special individual he is at birth. Then, introduce the world to him in a way that maximizes his delight and minimizes his frustrations.

Learn how to help your baby regulate his emotions, for example, by offering an emotionally overloaded baby some soothing sounds or rocking to help him calm down.

OLD THINKING: The mother pumps information and affection into the child, who participates only as an empty receptacle.

THE NEW THINKING: The loving gaze of parents to child is reciprocated by the baby with a loving gaze back to the parents, causing their endor- phin levels to rise, thus completing a closed emotional circuit, a sort of ‘love loop.’ Now, mother (or father) and baby are truly in a dynamic, interactive system.

The final aspect of this developing interactive system is the mother’s development of an ’emotional synchronization’ with her child: the mother’s ability to tune into the baby’s internal states and respond accordingly.

For example: Your baby is quietly lying on the floor, happy to take in the sights and sounds of the environment. As you notice the baby looking for stimulation, you respond with a game of ‘peek-a-boo.’ As you play with your child and she responds with shrieks of glee, you escalate the emotion with bigger and bigger gestures and facial expressions. Then, you notice the baby turns away. You sense your child needs you to back off for awhile as she goes back to a state of calm and restful inactivity.

Schore says the mother is teaching and learning at the same time. This moment-by-moment matching of emotion produces emotional connection. The mother needs to fine-tune her activity level to the infant during periods of interaction, and to allow the baby to disen- gage and recover quietly during periods of non play before initiating arousing play again.

Attuned interaction–engaged play, disengagement and restful non- play helps the brain develop the hardware and the software for the child to learn to regulation his or her own emotions appropriately.

The act of calming her down, or giving her the opportunity to calm down, will help her learn to handle ever-increasing intensity of stim- ulation and thus build emotional tolerance and resilience.

WHAT TO DO: There are two steps to maximizing your attunement ability: spontaneity and reflection. When in sync, you and baby will both experience positive emotion; when out of sync, you will see negative emotions. If much of your interactions seem to result in negative emotion, then it is time to reflect on your contribution to the equation.

‘Misattunement’ is not a disaster if you can become attuned again. Falling out of sync and returning to sync teaches children resilience, and confidence that the world will respond to them.

Let your baby take the lead. Follow the baby’s own spontaneous expression of himself. That lets the child know another person, i.e., mom or dad, can understand what he is feeling, doing, and even thinking. This assists in the development of empathy which is what makes us most ‘human.

Between twelve and eighteen months, positive responses from mothers transition toward instructions, directions, and prohibitions.

OLD THINKING: Researchers advised limiting situations in which the child would feel shame.

NEW THINKING: Limit the shame situations, but episodes of shame can actually stimulate development, as long as the shame period is short and followed by a recovery. It’s not the shame, but the inability of the parent to help the child recover from that shame, that is damaging.

WHAT TO DO: What is important to remember is there must be a quick recovery.

READ MORE ABOUT IT

The Irreducible Needs of Children: What Every Child Must Have to Grow, Learn and Flourish, T. Berry Brazelton, M.D., and Stanley Greenspan, M.D. (Perseus Books, 2000)

The Interpersonal World of the Infant, Daniel N. Stern

Parenting From Inside Out, Daniel J. Siegel