Connecting Dots That Shouldn’t Be Connected 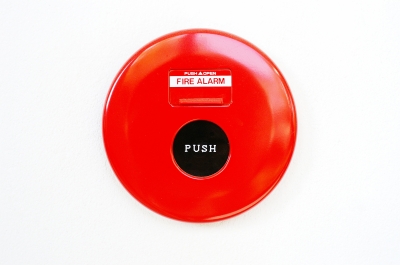 I’m at a hotel, and this morning they evacuated the building! It was about 8:00 a.m., and I was bumbling around getting ready for work, and suddenly there was a bzzzzzzzzzzzzt alarm and a recording over the speaker in the room: ‘An emergency has been detected in this building. Leave immediately. Use the stairs. Do NOT use the elevator.’ Huh?

OK, I figured I’d better get dressed and leave. Black shirt, gray slacks … socks … hm. I only see cotton socks, where are my nylon socks? Oh, here they are. Wait, these are the short nylon socks, I want the long nylon socks. All this time, the alarm is blaring and the emergency recording is playing over and over, telling us to get the heck out of the building. I decided OK, I guess if it’s an emergency, I can settle for the short socks.

Got dressed, got my purse, and headed for the stairs, never feeling a bit of fear even though I was being TOLD by a pretty authoritative source that I was in danger. That struck me as so strange afterwards, as we were all standing outside wondering what the emergency was. I can be in a plane and feel a thump, and the adrenaline spurts; but I’m on the 12th floor of a building that’s being evacuated because of an emergency, and I don’t feel much of anything but annoyance — I suppose because none of my senses (so easily deceived!) detected anything that looked, smelled, sounded, or felt like danger? And even though I was being told there was an immediate danger, it just didn’t register as danger because my senses were telling me a different story?

Realistically, shouldn’t I have been high-tailing it out of there? And from what I saw, my reaction wasn’t unique. Nobody was tearing out of their room and rushing down the stairs. Nobody outside was in their pajamas. It looked as if everybody had taken the same attitude I had: ‘Yes, I’ll leave, but first I’ll make sure I have my stuff. First I’ll get dressed.’

(As it turned out, it was a false alarm. Workmen had been digging in the parking lot and hit a water main, causing a small flood, and all the water set off the fire-detection system. So there really was no danger; but we had no way of knowing that at the time of the warning.)

Anyway, it just struck me — how much we base our behavior on what FEELS safe or unsafe, rather than what actually is safe or unsafe, just as you teach in the course. On reflection, I suppose I’m glad I did what everybody else did and didn’t go tearing out of there in a bathrobe (would have felt awfully silly among all those dressed people) … but tearing out of there would have been the wisest thing to do, had it been a real emergency.

Yes, it is amazing. If a smoke alarm goes off in the kitchen, we think: a. it could be a fire, b. it could be a problem with the smoke alarm, c. it could be something burning on the stove, d. it could be steam from a kettle. I like the German word ‘vorsicht’ which means foresight, look ahead and see what may be threatening; in English, we say ‘look out’.

In any case, all the smoke alarm is is an alarm. It is saying, ‘vorsicht’, ‘look out’ and see IF there is something that needs to be avoided; maybe there is and maybe there isn’t.

But consider a different situation. Your mom has moved in with you, and she is getting senile. You tell her to stay out of the kitchen because you can see she is not safe in there. She has taken the lid off the pressure cooker without releasing the pressure and pea soup exploded to the ceiling.

You know of a situation in which a friend’s aged mother left the burner on when she was heating cooking oil for frying, and left the kitchen and forgot about it. The frying oil caught on fire and caused a messy fire in the kitchen. Fortunately the fire department came quickly, but the cleanup was a problem. The smell of smoke and the smell of burned things was still in her house when you last visited.

Now she has taken to walking around the house in the middle of the night. You have been wondering what to do about it. You have been thinking that maybe she should be in a home for people with Alzheimer’s, but you hate to do that.

You go to sleep with that on your mind. At 2 AM, the smoke alarm goes off. You call for your mother, and there is no answer.

That’s the different, the context. In the first situation, you do mental ‘vorsicht’, mental foresight and you don’t picture (or perceive) anything all that serious.

You run downstairs, and find noting wrong. It was a false alarm with the smoke alarm. The perception of smoke started with imagination but became mistaken for real.

Next question: do you feel stupid or wise to have reacted like that? In the case you cited at the hotel, if you had gotten outside and found there was a fire or impending exposing, you would have felt stupid for taking your time. In the case of thinking your mother had caused a problem but it was only a false alarm, you might also feel stupid.

But that is all based on ‘Monday Morning Quarterbacking’. You have to make decision in the real world in real time, and if you action turns out to not have been necessary, maybe that’s OK. Next time might be different. You don’t know. So, you do ‘vorsicht’ to try to determine how valid this alarm is. But you really never know until your mental ‘looking out’ becomes physical ‘looking out’ in terms of actual examination.

On the plane, you are not in a position to do actual examination to check out hidden problems. The pilots are. There is really nothing you can do, so why not let those who can do it, do it. Trust? Well, that’s why you meet them.

How easily we trust must have to do with past experience, in part, very early experience.

But let’s go back to our examples. The context in which you went to sleep worried about a safety issue. You knew that in at least one situation, she had done something risky. The possibility of fire was real.

On July 3, 1988, the USS /Vincennes /shot down an Iranian airliner, killing 290 people. George H. W. Bush said, ‘One thing is clear, and that is that the USS /Vincennes/ acted in self-defense.’ It was soon shown that the airliner was well within its airway and the attempted cover-up failed.

Psychologists who reviewed this military blunder called it ‘false closure’. The context led the commander of the ship to mistaken feel that he had connected the dots indicating the Vincennes was under attack.

When closure takes place, we move from assessment and possibility – or even probability – to certainty. Usually we have enough information to connect the dots accurately. But under stress, and with a certain context, we connect the dots WITH FEWER DOT OR ONLY ONE DOT: possibility. With a certain context – and with a deficit of ‘self-soothing’ – stress builds up and the dot of possibility becomes certainty by false closure.

Without cognition to stop it, just enough stress produces enough ‘dot-of-feeling’ to produce false closure. We have to consider that this borders on psychosis: just because you ‘FEEL’ something is true, you do not reach CERTAINTY that it is true unless you dispose of all cognition that should stand in the way. Though we can have this happen and not be considered insane, when it does happen, it is a form of temporary insanity.

I’m sure that I have been on flights totally relaxed in the cockpit while some passengers in the back believed they were about to die because they connected dots which did not belong connected.

Being able to start off from a relatively calm state allows us to assess the dots, and decide whether they really or supposed to connect or not. What we want to make it possible for you to ‘chill out’ enough that the dots do not get connected through false closure. Cognition needs to remain in play, and that is possible only through self-soothing which prevents a rush to connect dots (in one’s own mind) that really do not connect in the real world.