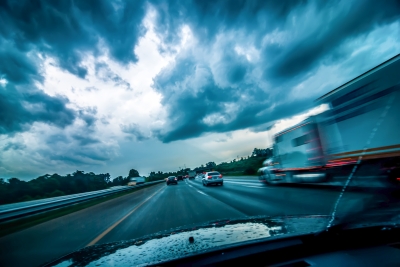 It has been raining a lot here in Connecticut. Tonight driving home in the rain, I was being quite careful. I started thinking about driving versus flying No doubt every airline pilot also drives, and I’m sure if you asked, every one of them would tell you they feel safer in the plane than in a car – even though the skills of being an airline pilot carry over to driving and make them exceptionally good drivers.

I was thinking of asking you to come up with the number of miles you drive in a year. If you drive 15,000 miles a year mostly in urban and suburban areas, divide that by 5.4. The result is 2778. In a years driving, you would have a risk equal to 2778 airline flight.

Then I started thinking how many flights I did a year as a pilot. When I flew New York to Tokyo non-stops, I did 6 flights a month. Figuring a months vacation, that comes out to 66 flights a year. So, as a professional airline pilot, I was 42 times safer (assuming I did no driving) than a person driving 15,000 miles a year.

When I did New York to L.A. or San Francisco flights, I did 16 flights a month, or 176 flights a year. So when doing those trips, I was about 16 times safer.

Of course, when I add in the drive to the airport 8 times a month to do those 16 flights, the driving exposes me to the same risk as 148 flights If I add my driving and flying together (expressed in terms of flight) 148 plus 176 equals which is way short of the 2778 flights driving 15,000 miles equals in terms of fatality risk.

If we only had half a brain, if it were the left half, knowing that flying is safer than driving is a ‘no brainer’; we would always fly rather than drive if given the option. But if the half were the right half, we would never fly Why? Because the emotional part of the brain looks at that one single crash that happens once every several years in the U.S. and can’t get past the idea that that could be the plane I’m on.

Logically, we know flying is the way to go. Emotionally, it is no way to go But we do have two sides of the brain, and we need to let them balance each other.

Some seem to think the rational mind should dominate; I don’t agree with that. I think we need to make rational decisions INFORMED by feelings but NOT DOMINATED by feelings.