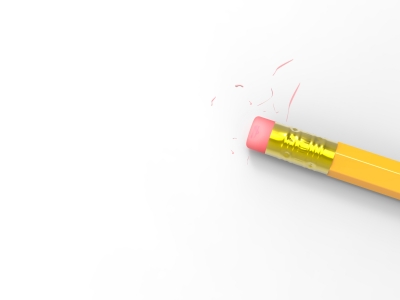 The movie ‘Eternal Sunshine of the Spotless Mind’ is about the idea that when a love affair breaks up, instead of feeling pain, you just go to a psychologist who erases all memory of that person.

After a breakup, Jim Carrey goes into the store where his ex-girl friend Kate Winslet works. She looks up at him, and says, ‘Can I help you?’ He goes into near-panic that this woman who is so important to him does not know him at all.

She has erased him from her mind. Carrey is shocked. Nothing he can do or say causes her to remember anything about him or their relationship. Carrey decides to erase her. But things go wrong with the procedure and . . . well . . . it is a movie you will either hate or love.

In some cases, there has been a flight which was so traumatic that just to think of it causes a reaction. Obviously, that gets in the way of feeling good about any future flight.

So erase it. I did years of study in various institutes in New York looking for ways to deal with anxiety. One year was spent studying NLP. I found little there that was effective – except for the Erasure exercise. This exercise can actually erase a memory. It is not always wise to erase a memory. But if a person has had a traumatic flight, there is no reason not to – at least – make the memory fuzzy enough so that recalling the flight causes no anxiety at all.

How Is It Done?

When you watch a movie, it starts at the beginning and runs to the end. Memory is like that. When a past event comes to mind, you pick up the memory at a certain point and then memory leads you forward in time.

Imagine you have a movie of a certain event. Normally you run the movie from the beginning to the end. But what if you reversed things? What if you decided to run the movie repeatedly starting at the end, and viewed everything happening backwards?

After a few backwards viewings, it would become difficult – if not impossible – to remember some of the actual sequence of events.

After a few more backwards viewings, interspersed with some forward viewings, the whole thing would become like scrambled eggs.

That’s what happens in the Erasure Exercise. The awful flight starts to become a bit scrambled, and it takes only a little scrambling for the anxiety connected with the flight to disappear.The erasure exercise is demonstrated in The Control Of Anxiety DVDs. It is a complex exercise which should be done in a counseling session and not tried on ones own.