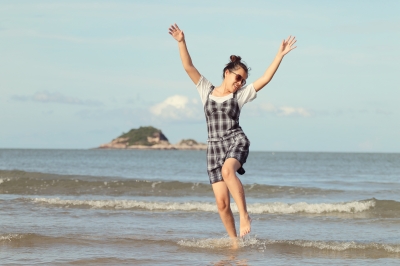 There has been increased recent attention in the question philosophers struggled with two-thousand years ago: do humans have ‘free will’? Interest in the question has been renewed by psychological tests that have been recently devised which show that, in many cases, people behave in a certain way before they are aware of what they are going to do. Yet, they believe they consciously chose that behavior.

When considering how feelings of fear develop, it is striking that the amygdala causes the feeling of fear by releasing adrenalin before there is any conscious awareness of danger. Most of us would say that we are aware of danger, and then feel it. But it is the other way around. Think of times which you felt your hair stand on end, and then you realized what it was about.

It is so important to realize that the feelings which can prevent us from flying are feelings that develop from the unconscious operation of the amygdala. Why? Because knowing the feelings come before we know what is going on should make it obvious that any rational approach to dealing with fear of flying is going to be ‘a day late and a dollar short’. By the time we are aware of what is causing fear, the fear has already been caused.

But all those thoughts trigger the amygdala while the thought is in the process of being formed. The stress hormones are released before the thought is conscious. Trying to deal with fear of flying through reason just isn’t going to work.

That is why courses which try to reassure you that flying is safe, give you statistics, even tell you about back up systems, etc., still are not going to do the job.

That is why, even if you know turbulence is not a safety problem, you still can get a shot of stress hormones when you feel the plane move downward, even for a fraction of a second.

In the SOAR Course, we do teach you how flying works, but it is not because knowing that will stop anxiety; it won’t. Understanding how sound aviation is does give you a sort of ‘permission’ to do the exercise that changes the automatic reaction. To explain what I mean, I could say to you, ‘I don’t want to get rid of my fear of Russian Roulette, or even or motorcycles.’

Perhaps this explains why change is so difficult. But how is change possible? If we can actually look within and see the steps in the process — like dominos in a row where the falling of one domino causes the next to fall, which causes the next to fall, and so forth — if we can find a conscious thought which is like a domino, and then if we can find a way to be aware of the process quickly enough to pull that domino out of the sequence, we can produce change.

But we also know that the dominos may be — as with flight anxiety — ‘falling’ in an area where they cannot be seen. How can change be accomplished?

Since we know (in dealing with flight anxiety) that high anxiety is caused by unconscious process, we have to change unconscious process to get rid of the anxiety. This is where the Strengthening Exercise comes in. We find a moment — consciously — which is connected with strong soothing influences, a moment of empathic connectedness with another person. We bring to mind — consciously — a scene from flying, so that the strong soothing influence of empathic connectedness becomes associated with the scene from flying.

It is just as simple as learning to drive a stick shift, or to hit a tennis ball. You do it consciously several times, each time carefully the same way, so the unconscious mind can memorize the sequence. Soon, you are shifting without a thought, or, at least without a conscious one.

If you believe you have sound and logical reasons to not fly, I can only hope you will use this article to examine the possibility that your ‘free will’ is somehow being limited by (unconsciously caused) emotion.

Writer Isaac Bashevis Singer once said, ‘The greatest gift which humanity has received is free choice. It is true that we are limited in our use of free choice. But the little free choice we have is such a great gift and is potentially worth so much that for this itself, life is worthwhile living.’