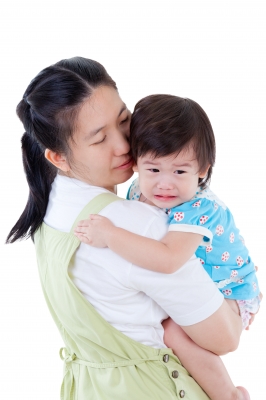 It comes down to this. When we are born, HALF of the emotional control system in the brain is mature and works fine; the other half doesn’t exist at all. The half that is mature is the part that ‘revs us up’, for as everyone knows, a baby knows how to get upset. The half that doesn’t exist is the part of the emotional control system that provides calming, or what psychologists call, ‘downregulation’ (being reved up is called ‘upregulation’).

It should be obvious. But some adults doesn’t understand: the baby has ZERO ability to calm itself, or to respond to demands that it stop crying.

The part of the brain that will become the ‘computer’ that ‘downregulates’ the baby doesn’t get built until the baby is about ten months old. Suppose someone gave you a laptop, and you hit the ‘on’ button and nothing happened. And you said, ‘Hey, this thing doesn’t work.’ What if the person who gave you the laptop said, ‘Right, you have to program it yourself; you have to write your own software.’

A baby can’t program its own downregulating computer. How, then, does the computer get programmed? By BEING calmed consistently again and again and again, what is done to calm the baby becomes recorded.

Fast forward to age five. It’s time for kindergarten. The child who has a great video of being calmed by mom can play that internal ‘video’ if he or she gets upset at kindergarten.

Though there is remarkably little that can be done to increase intelligence, parents focus great attention to trying to. Yet, good ability to regulate emotions – which is something than parents CAN do (if they know how) – will take a child, when he or she grows up, much, much farther in life than will a 180 IQ. EQ, as Daniel Goldman calls it in his book ‘Emotional Intelligence’, is more important than IQ. See http://www.eqi.org/ and http://www.ihhp.com/

A lot of us do not learn how to calm ourselves naturally. So we don’t think it is that unusual when a person turns to EXTERNAL ways to provide the calming which should happen INTERNALLY.

What are the external ways? Well, sex, drugs and rock and roll for teenagers (of all ages), and this could include both illegal and legal drugs such as Xanax, alcohol, and cigarettes. And external control! When we can’t control our feelings inside, we may turn to controlling everything and everyone we are associated with.

When it comes to control, we need to know the situation is 100.0000% controlled (a 0.0001% chance of disaster in terrifying), or we need to be able to bail out if things go wrong; otherwise, we avoid being involved.

Oversimplification extends to terms of ‘good’ and ‘bad’, ‘right’ and ‘wrong’. We are good; they are evil. (Of course, they say the same about us). There is a huge amount of support for oversimplification and illusion. For example, moral relativism is condemned by people who are professional illusion merchants.

The more stuck we are in oversimplified thinking, the harder it is to recognize the illusions we use to avoid anxiety. And when we depend on the oversimplification and illusion involved in ‘safe’ and ‘unsafe’, it becomes hard to deal with the fact of life that we are all vulnerable, and everything we do involves risk. Our refusal to recognize this makes flying difficult, because – though we can fool ourselves about safety in our day-to-day lives – we can’t do it when it comes to flying. Flying strips us of the illusion of control, the illusion of safety, and flyin does this at the same time it denies us our ‘security blanket’, the Earth.

The SOAR Strengthening Exercise provides a way to fix the soothing that didn’t get put adequately in place when you were between zero and two years old. We have developed an exercise which lets you find a moment in which some very real and correct soothing did take place; we grab that moment and that feeling, and we solidly attach it to every moment (moment by moment) involved in the thing you want to do: to fly, to take an elevator, to go across a bridge, to go upstairs in a building or apartment, or possibly to live without trying to control everything and everyone.