Keeping “What If” Thoughts Separate 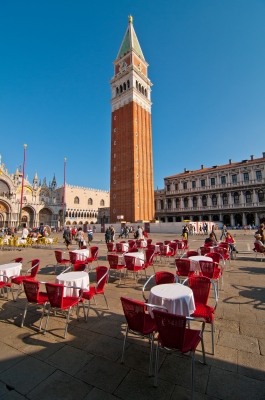 Years ago, I went to Venice with a friend. You may have seen St. Marks Square in movies It is a huge square with outdoor cafes, a tower, and – at one end – the Doge’s (The Duke’s) Palace and the Basilica.

If you go into the Basilica, and go up into the balcony, there is a doorway that lets you out to a deck. The deck is elevated and from it you have a magnificent view of St. Marks Square and all of Venice, the harbor. I took her out there and suddenly she said, ‘Get me out of here!’ My first thought was, ‘What – we ARE out (because we were outdoors).’ She started yelling, ‘Get me out of here, get me out of here.’

Not knowing anything else – though it didn’t make logical sense – I took her back inside.

She said, ‘You knew better than to do that.’

She said, ‘You knew better than to do that.’

I asked, ‘What are you talking about.’

To me it was marvelous being out there, being able to see all of Venice I would look down at a cafe, at the pigeons, at people walking, at the tower, at rooftops, at the harbor.

For her, it was too much; instead of seeing those things ONE AFTER ANOTHER at a comfortable pace, she had them all hit her at once.

It was these various items which I saw one at a time, which overwhelmed her because she saw them all at once.

Flight anxiety is like that. For some reason, we have trouble looking at one ‘what if’ after another at a comfortable pace; instead we look at the all at once, and since each one releases a shot of stress hormone, all of them at once causes multiple simultaneous shots of stress hormone.

All that is necessary to gain control over overwhelm is to learn to organize, to put things into context, so we can deal with them one by one at a comfort- able pace, a pace at which any stress hormones released has a chance to be used up before going to the next ‘what if’ thought.

Under stress, being able to keep things in context may go out the window; we found that – to be assured of protection against anxiety – the mind must be trained IN ADVANCE TO DO IT AUTOMATICALLY.

That is what we do with the Strengthening Exercise: we train the mind to AUTOMATICALLY deal with ‘what if’ thoughts one by one, and each one in a context that does not cause the release of stress hormone.