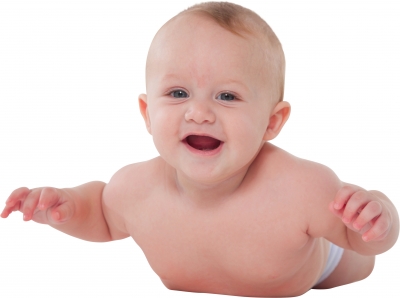 Social referencing is something we all do. It refers to the tendency to look at the facial expressions others display when we are not sure what to do in a situation.

Research shows that we learn to be guided by the expressions on another person’s face by the time we are ten to twelve months old.

Consider this experiment. Researchers took a glass table and covered half of it underneath. In the experiment with 12 month old babies, a baby was put on the glass table where it was covered. Then, the mother would go to the other end of the table. But to get to the mother, the baby had to crawl over an area of the glass table which could be seen through. This, the researchers called, a “visual cliff”. The babies didn’t know if it was safe to crawl there or not.

In the first group, a mother – at the far end of the table – was told to show the child a fearful expression. This was done with 17 babies, and not one ventured over the visual cliff.

In the second group, mothers were told to show a happy face. In this second group 14 out of 19 babies crossed over the visual cliff. What is shown on a trusted person’s face has a great influence on us – not only as children – by as adults.

Let me ask you to take a few moments as you listen to this, and see if your thoughts can drift back through the many moments you have experienced in your life and I’d like to find out if there is one like this.

If so, I would like to ask you to let some worry come to mind. And as that worry begins to form itself in your mind, perhaps as works, perhaps as something you can see in your mind’s eye, that worry . . . well . . . I wonder if you could let it – – – after all you are with someone you are totally comfortable with – – – let an expression of that worry show on your face. And whoever the person you are with is, READS that expression, and begins to sense your worry.

I wonder if you can notice how good it feels to know that someone else you feel good about can feel what you are feeling about that worry, and . . . notice . . . that person’s face. As THEY take in the awareness of your worry . . . and let them really take it in. In fact, it is OK if they take it in so much that you seem to have lost touch with it inside you because it is all out there, over there now on his face or her face.

And now let’s try it with an additional worry. And this time, again, it could be about an airplane situation or it could be about some other situation. I wonder if you could let that concern show up on your face so that other person with you can take it in, and then, notice how you feel knowing that they ALSO know.

And since this is working so well, I’m wondering if you would be willing to kind of say to yourself, well, since I’m on a roll here, I think I will just let some more of my worries show up on my face and as they do, this person who is with me can pick those up, too. And as he or she does, there is less and less for me to be concerned with.

And I’m just going to let ALL of my worries and concerns move out and outward onto my face and over to him or her so he or she can know and feel and sense and have an awareness of everything there was for me to worry about here inside.

And now, I’m going to ask you to imagine that you pick up a picture . . . a snapshot . . . a photograph taken of you on a plane. I’m going to ask you to hold it up so that person can see it. They can see the front of the picture. You are holding it so they can see the front of it, which means you only see the back of it, but that’s OK, because I want you to see their face. I know you know that their face can’t lie, and you can know what they are feeling when they look at this photograph of you. It is a picture of you sitting on a plane, your tray table is open, there is some food on the tray and something to drink. What does that person you are with, what does their face say about that?

And now, you have another, a different picture in your hand. And you hold it up so they can see it, see the front of it, you just see the back side of it which is blank, but that’s OK because I want you to see that person’s face who you are with, and notice their face as they see YOU on an airplane with the seat belt sign on and that might mean some turbulence of some kind, which of course is not a problem for the plane, but what does that person’s face show as he or she sees a picture of you on an airplane with turbulence. Are they concerned about your safety? Or, are they aware that you are safe, and does their face show that they know you are safe, and does their face help you know you are safe, and feel you are safe?

So, let’s take out another picture. This is a picture of you as the airplane is taking off. What does their face say about that?

And here is a picture of you taken after you finished your flight, and you are leaving the airplane or leaving the terminal, or you are someplace you have always hoped to be. What does their face say about that pictures.

I would like to see if you can sort of slide IN TO the picture, and be in the seat on the airplane and STILL know that that person can see you and know that you are OK?