Why Die All Tensed Up? 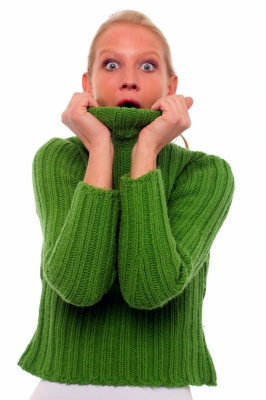 A reader emailed the following question. ‘I want to know why, though. Why do we fear something, but think that by fearing it, we can keep it from happening? Or, is it because we want to be prepared????’

According to Freud, the first time a person has a trauma, it is traumatic because it comes ‘out of the blue’, completely unexpected and no one is prepared for this, having never known such an awful could even happen. It crushes you. It causes your whole world to crash. You feel you cannot ever let this happen again. So you must do something. You must never be caught by the unexpected. So, you decide you must expect it when it comes, and since you can never know when that might be, you must expect it at every moment. You must look ‘to the blue’ constantly, always expected disaster.

But you realize that simply expecting it, though it braces you for disaster, doesn’t prevent it. So you try to get scientific, and think, ’cause and effect.’ Let’s see now. What was going on JUST before the disaster hit? Maybe what was going on just before the disaster was the cause of the disaster. Well, I was . . . ‘happy’ . . . and ‘relaxed’ . . . and thinking life is ‘wonderful’ and . . . ‘nothing can go wrong.’ That’s it. That’s what caused it. So, I must never be 100% happy, never be 100% relaxed, never 100% feel life is wonderful or think anyone is 100% wonderful, and never think ‘nothing can go wrong’ because thinking that CAUSES disaster!!!

So there you are. If you can simple see through this logic, which was set up years ago when you were a child, and covered over, then you can understand that what you think and feel does not influence world events (though some of us still think we can ‘visualize world peace’ and have the illusion that that actually does something; that is just the reverse of this child-like logic that we must be on guard at every moment to keep awful things from happening).

Under stress, we easily interpret incorrectly. I feel something, and jump to a conclusion which terrifies me. Now, this is tied directly to the first……..fearing for a purpose, ……. fearing in order to stave off bad things…….

When I was in in Air Force, they sent us F-100 student pilots through a short version of the training seen in the movie ‘Top Gun’. At the training site, the Fighter Weapons School at Nellis Air Force Base, the most elite of the Air Force pilots taught ‘Top Gun’ techniques and maneuvers to students like us.

You would think that the instructor pilots there would be the most ‘macho’ of all pilots. They weren’t. They were far too skilled and wise to be that way. And on the bulletin board, someone has posted, ‘If you are flying an F-86 straight East at 35,000 feet and someone else is flying an F-86 straight West at 35,000 at the exact same point, with each plane flying at 500 MPH, there is a closure rate of 1000 MPH. By the time you see the other plane (the F-86 was tiny, so it couldn’t be seen very far away), there is only 0.08 seconds until impact, and your reaction time is 0.12 seconds, so there is nothing you can do to avoid a collision. The point is: since there is nothing you can do, ‘why die all tensed up (by being on edge when you fly to try to avert a collision)?’

In other words, there are things that can kill us which we can do nothing about and staying tense does nothing to prevent those things from happening, and all staying tense does is let you both live and die all tensed up for nothing.

But we now know that this tension actually shortens ones life because it causes stress hormones to be released which wreck the immune system.

Having introduced the question of mid-air collision, and the difficulty of seeing a small plane in time to react, you should know that since December of 1991, all U.S. airliners were required to law to have an on-board anti-collision device to protect against collisions. Now this is installed on foreign airliners as well, and it works beautifully.